We are deeply saddened to hear of the loss of Thuten Kesang, a cherished member of International Tibet Network. 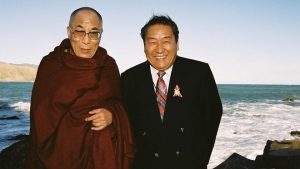 Thuten la served as a member of International Tibet [Support] Network founding Steering Committee in 2000 and remained a devoted and active member of the coalition.
Thuten has been an inspiration to us all and we are forever grateful to have had him as a colleague and dear friend. He will always be remembered for his endless enthusiasm, indefatigable spirit, a wealth of kindness and compassion and his continuous efforts to bring freedom to Tibet.

We share our deepest condolences to Thuten la’s family, and to the Tibetan community in Aotearoa.

On Sunday, 23 May 2021, Thuten Kesang QSM, loving husband, father, grandfather and an ardent Tibet advocate passed away at the age of seventy six.

Born in Lhasa, the capital of Tibet in 1944, he was sent to India by his parents in mid 1950’s before the Chinese invasion of Tibet and later graduated from Dr Graham’s Homes, a Christian boarding school in Kalimpong.

He moved to New Zealand in 1967 and for many years was the only Tibetan in New Zealand. That said from day one he started disseminating information about Tibet by giving interviews to Auckland Star and New Zealand Broadcasting. He actively took part in Tibetan Children Relief Society of New Zealand from 1967 and became it’s Treasurer, a position he held until his passing. TCRS sponsors hundreds of Tibetan children in India across TCV and Mussoorie Homes Foundation. He founded Friends of Tibet, New Zealand in 1986, served as the President and was the political voice of Tibet in New Zealand. He also actively took part in Auckland Multicultural Society Inc. representing Tibet at its annual expos. He served in various capacities including President across various terms. He was also a life member at Browns Bay Racquet club. The name of one of his tennis teams, ’Team Tibet’, inspired the title of the 2017 feature-length documentary on his life. His memoir “Tibet- The Home I Left Behind but will never Forget” with foreword by His Holiness the Dalai Lama was also released the same year. 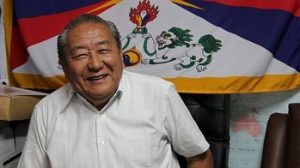 Prior to the inception of Office of Tibet, Canberra, Thuten was appointed internally as Honorary Secretary of the Liaison Office of Tibet New Zealand by Pema Gyalpo in Japan 1989, then representative of His Holiness the Dalai Lama for the Asia-Pacific region. Through that he set up the Dalai Lama Visit Trust New Zealand and all of His Holiness’s visits were overseen by the Trust.
He served as the head of Tibetan Community in New Zealand from 1967 till 2015 and later as head of Auckland Tibetan Association till 2019. He facilitated the Tibetan language and culture weekend classes for Tibetan children in Auckland in 2020. He attended numerous conferences on Tibet worldwide, lobbied for Tibet in the Parliament in Wellington and gained multiple supporters. He was also the Secretary/Treasurer of Dr Graham’s Homes in New Zealand Committee. Words fail to describe his selfless dedication and contribution to the Tibetan cause.

He was conferred numerous awards for a life of service:

1) Unsung Heroes of Compassion Award, presented by His Holiness the 14th Dalai Lama.
2) Queen’s Service Medal, awarded by the Government of New Zealand.
3) Auckland City for Peace Award by The Peace Foundation and Auckland Council.
4) Certificate of Achievement at the New Zealander of the Year Awards 2019
5) Unsung Heroes of Tibet Award, by Auckland Tibetan Association 2020
6) Awards at his tennis club 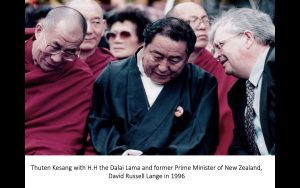 The Auckland Tibetan Association with Whangarei, Christchurch, Dunedin Tibetan Associations and Tibetans in Nelson, Tauranga, Wellington as well as Tibetan Buddhist Centres across the country express great sadness and send our heartfelt condolences to his wife Gwendoline Kesang, daughters Tsering Kesang Pheasant, Elizabeth Kesang Gee and extended family. Thuten lived a life full of compassion and purpose. He was a proud and happy Tibetan-New Zealander always ready to sing his favourite old Bollywood songs. We pray for his soul to rest in peace and consciousness to be reborn as a Tibetan under the realm of Avalokiteśvara.
ཨོཾ་མ་ཎི་པ་དྨེ་ཧཱུྃ ཨོཾ་མ་ཎི་པ་དྨེ་ཧཱུྃ ཨོཾ་མ་ཎི་པ་དྨེ་ཧཱུྃ