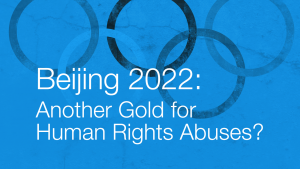 The power of the Olympics to be a platform for human rights advocacy was decimated after the 2008 Olympics in Beijing, when the Chinese government reneged on its promises by perpetrating a crackdown while the world stood idly by. Now, 10 years later, the Chinese Communist Party is exporting its anti-human-rights policies to free societies.”  Josh Rogin, Washington Post

Ten years ago the International Olympic Committee’s reputation was indelibly stained by the 2008 Beijing Olympics: fast forward to 2018 and custody of the Olympic Flag is once again being handed to China, despite its previous failure to adhere to Olympics-related promises on human rights and the well documented surge of rights violations since 2008.

As in 2008, China’s leadership regards the prestige of hosting the Olympic Games as an endorsement of its brutal policies and specifically of President Xi’s wholesale effort to silence dissent – at home and abroad – across a range of issues, not least China’s continued military occupation of restive Tibet. On Xi’s watch, prominent human rights defenders have died in custody: notably Tibetan Buddhist leader Tenzin Delek Rinpoche and Nobel Peace Laureate Liu Xiaobo. Earlier this year, Tibetan shopkeeper Tashi Wangchuk was tried on charges of ‘inciting separatism’ for expressing concern about the lack of education in the Tibetan language. An unprecedented wave of self-immolations by Tibetan monks, nuns and laypeople dramatically increased as Xi took power; at least 152 Tibetans have now set fire to themselves in Tibet, with the vast majority having died.

International Tibet Network’s new report, ‘Beijing 2022: Another Gold for Human Rights Abuses?‘, details the magnitude of rise in human rights abuses by China in Tibet since the the Beijing 2008 Summer Games.

In the decade since the 2008 Olympics Beijing has reinforced its rule of Tibet, tightening restrictions on civil and political rights such as freedom of expression and assembly and crushing public protests with force. Public protest and private dissent in Tibet are criminalised as “inciting separatism”, or attempting to break up the People’s Republic of China, a state security crime that carries a long prison sentence.

For the past three years the US NGO Freedom House has ranked Tibet as the second worst place in the world for political rights and civil liberties, behind only Syria with an increase in the use of lethal force, heightened surveillance and harassment, worsening freedoms of religion and cultural rights, widespread detention without charge and a prevalence of torture and ill-treatment of Tibetan prisoners.

Despite China’s previous failure to adhere to Olympics-related promises on human rights and the well documented surge of rights violations since 2008, the IOC still chose to award  them custody of the Olympic Flag. Now, with a reputation already in tatters, Thomas Bach, the IOC President, must work tirelessly to ensure that they do not fail to act again or risk that human rights abuses will overshadow the Games.

Read and Download the Report or read via ISSUU