The International Tibet Network’s Beijing Olympics campaign consisted of four main initiatives around which the campaign was coordinated globally: Team Tibet, the One Year Countdown, the Torch Relay, and Public Engagement Activities. Below is a summary of one of these activities; the Tibetan Freedom Torch Relay.

Following the end of the Olympics campaign, the Network embarked on a detailed evaluation of the campaign. Read a summary of this evaluation.

The Tibetan Freedom Torch symbolised the hopes and aspirations of the Tibetan people for freedom and justice and the commitment of people around the world to helping achieve this dream. The Olympic Torch should embody the ideals of peace and harmony for all, but in 2008, the Chinese government tried to use the Olympic torch relay to cover up its brutal occupation of Tibet and abysmal human rights record, while the International Olympic Committee refused Tibetans’ requests to be represented at the Games. The Tibetan Freedom Torch relay gave voice to the true ideals of Tibetans and reminded the global public of the need for action to bring an end to China’s occupation of Tibet.

The Tibetan Freedom Torch was lit in Olympia, Greece in March 2008, following which it traveled to more than 50 cities until 7 August, and finished near the Tibet border in Ladakh, India on 8 August, the day the Olympics began in Beijing. 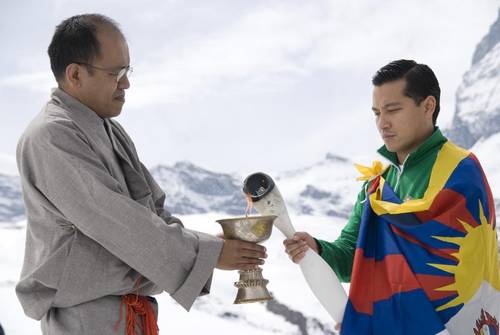 The Tibetan Freedom Torch is lit from a butterlamp in Zermatt, Switzerland. Photo: Tibetan Youth Association of Europe.