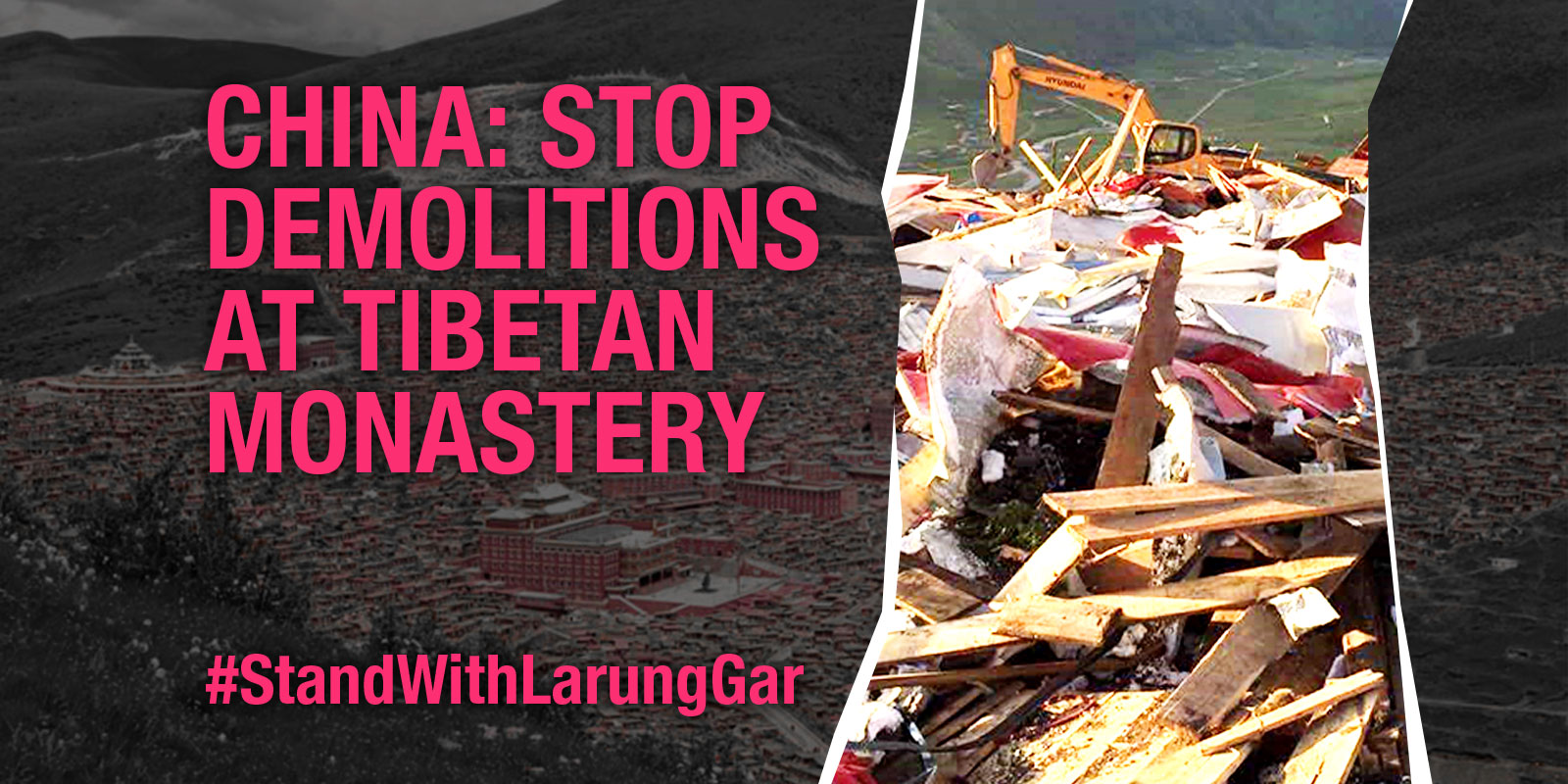 Urgyen Badheytsang (Students for a Free Tibet) and Eleanor Byrne-Rosengren (Free Tibet) will be giving an update on how the campaign has developed since the TSG Conference in Brussels, stressing the importance of the campaign, and discussing further coordinated actions.

The hangout can be see via this page (below) or watched at http://youtu.be/LJZtHiwJnoM

BACKGROUND: The world’s largest Tibetan Buddhist academy, Larung Gar, is currently facing wide-scale demolitions by the Chinese government. The multi-year plan, which aims to downsize Larung Gar’s population by 50% and evict and displace at least half of its 10,000+ residents, began on July 20th, 2016.

At the recent 7th International TSG Conference in Brussels Tibet group delegates voted to develop coordinated action against the demolitions and expulsions at Larung Gar, the world famous buddhist institute in eastern Tibet.

A small working Group of SFT and Free Tibet, convened by Tibet Network, have been working to expand on the draft plan, which can be seen HERE. The goal is to generate joint and individual actions by Governments, focusing on Larung Gar (and also Yachen Gar).

Resources and materials, including sample letters and share images, can be found in a Google Folder

Social Media resources: Students for a Free Tibet have created an “I Stand With Larung Gar” ‘Twibbon’ – a way for supporters on social media to add the slogan to their profile pictures. There are already nearly 4,000 sign ups and we encourage Tibet Groups to add a twibbon to your own pages, and promote to your supporters via the link http://twibbon.com/support/i-stand-with-larung-gar?fb_ref=Default

Further images and social media resources and materials will be shared shortly.

Webpages:
Students for a Free Tibet have designed a dedicated sitewww.StandWithLarungGar.org, which features information about the situation, a ‘Take Action’ area for supporters to send a message to their Foreign Minister and a campaign endorsement section to highlight Tibet Groups that are working on the campaign. Please share this page and contact Sonamtso (sonamtso@studentsforafreetibet.org) if you would like your Group’s logo added to the site.

Free Tibet has a dedicated page, www.freetibet.org/urgent-action-larung-gar-buddhist-academy, which includes options to send a message to the United Front Work Department in Beijing, and also to Chinese Ambassadors in the UK, USA, India, Australia, Canada, France, Germany and Ireland.