Tibet At A Glance

Tibet at a glance

When Tibetans refer to ‘Tibet’ they are talking about the entity comprising the three provinces of U-Tsang, Kham and Amdo. The two Tibetan provinces of Kham and Amdo are now largely incorporated into the Chinese provinces of Qinghai and Sichuan (upper/right regions in brown on the map below). Tibet’s traditional territory now accounts for one quarter of the landmass of today’s People’s Republic of China.

When China talks about ‘Tibet’, they are referring only to the Tibet Autonomous Region (TAR), an administrative region created in 1965. The TAR (lower/left regions in brown in the map below) comprises less than half the total Tibetan lands and contains only a third of the total Tibetan population.

China occupied Tibet in 1949/50. For an overview of the impact of China’s policies on Tibet – on the human rights situation and on everyday life for Tibetans in Tibet – over the last 60 years, please visit the Network’s website: www.chinasfailedtibetpolicies.org 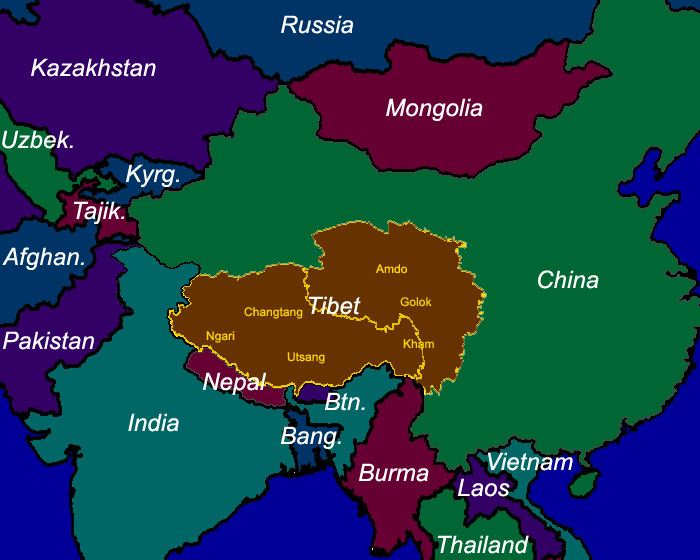 Tibet’s traditional three provinces are shown along with other regional names. Following centuries of isolation, many Tibetans may think of themselves as Khampas or Amdowas before they refer to themselves as Tibetans (not unlike, say, people from Texas). However they will invariably consider themselves Tibetans and not Chinese, in spite of half a century of intensive Chinese efforts to erase the notion of a separate Tibetan identity.

The Communist Party of China rules occupied Tibet. However Tibetans, both inside Tibet and in exile, recognise the Tibetan Government in Exile based in Dharamsala, India as their legitimate government.

All Tibetans recognise His Holiness the 14th Dalai Lama as the leader of Tibet. The Dalai Lama has lived in Dharamsala, India since 1959. In March 2011, His Holiness announced his intention to devolve his political authority; in May 2011 the Tibetan Charter of the exiled community was amended which means His Holiness is no longer the Head of State of the Tibetan people, though Tibetans will continue to regard him as such. His Holiness’ political responsibilities were shared between the elected Sikyong, the Executive (Kalons), the Parliament and the Judiciary. The Head of State under China’s occupation is the Chinese President Xi Jinping.

Under Chinese rule, the Tibetan landmass has been divided into the following administrative units:

Tibetan. The official language in Tibet following the occupation is Chinese.

The majority of Tibetans practice Tibetan Buddhism. Other religions include Bon, Islam and Christianity.

For an overview of the impact of China’s policies in Tibet between 1951 and 2011, please visit the Network’s website: www.chinasfailedtibetpolicies.org