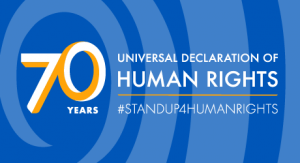 As the 70th anniversary of the Universal Declaration of Human Rights (UDHR) is commemorated, there will be much reflection on how far the world has come since 1948, when this “milestone document, which underpins all international human rights law” was created.

One United Nations Member State that stands out as a significant exception against the advancement of human rights is surely China. Indeed, its escalation against the Uyghur people in the last year surely qualifies as one of the most audacious and outrageous assaults against a people, anywhere in the world, over the last 70 years.

China’s dedication to creating the ultimate police state is without compare. For decades, Tibet has been China’s laboratory for repression; a place where the Chinese authorities have tested, and sought to perfect, systems of mass surveillance and abject control. In 2011 Party Secretary Chen Quanguo took that repression to a whole new level, introducing the Orwellian ‘grid system of social management’ with hundreds of “convenience police-posts” installed to monitor daily life, thousands of individuals recruited as ‘Red Armband Patrols’ to intimidate communities, and household members manipulated to spy on each other. A major operation to detain Tibetans attending buddhist teachings was launched, ‘disappearing’ pilgrims for weeks or months to ‘re-education’ in military camps and other facilities.

In 2016 Chen Quanguo was posted to East Turkestan (Ch: Xinjiang Uyghur Autonomous Region), where the systems he had tried and tested in Tibet over a five-year period were rolled out in just two years; the grid-style management system and convenience police stations, 50,000 new hires for police-related jobs, and a massive network of detention camps absolutely breathtaking in its scale. At least one million people are believed to have been detained in these camps, including children in their teens, pregnant and breastfeeding women, and elderly individuals such as the 78-year old mother of exiled Uyghur activist Dolkun Isa, who died while detained.

China’s multi-pronged approach to tightening political control is also felt in Southern Mongolia where the ‘Ecological Migration” and “Total Ban Over Livestock Grazing’ policies are threatening the total eradication of the Mongolian traditional nomadic civilization. Thousands of Mongolian herders seeking to defend their way of life and their rights to land and natural resources have been arrested, detained and imprisoned without any legal due process. Chinese lawyers and human rights activists are likewise targeted by politically motivated prosecutions, and freedoms in Hong Kong have taken a sharp downward turn with China influencing harsher sentences on activists and dissidents by biased judgements, and unfairly disqualifying pro-democracy lawmakers from the legislature. Furthermore, Beijing’s determination to ‘unify’ Taiwan with the People’s Republic of China has seen a full scale campaign to press Taiwan’s current allies to break official ties, and demand private international companies remove any and all references suggesting Taiwan as a state.

Of late China has had increasing success in influencing corporate decision-making beyond its own borders, forcing companies to apologise for offending ‘Chinese sensibilities.’ Moreover, there is concern that companies are increasingly willing to compromise their core values and undertake China’s repressive dirty work, for example Google’s forthcoming decision to re-enter China with its controversial ‘Dragonfly’ search engine developed for the Chinese market which will see the company comply with China’s tight censorship laws, effectively facilitating the Chinese government’s repressive regime and compromising their commitment to human rights.

Faced with the reality of this crisis of repression, we can draw hope from the determined resistance of those who live under China’s rule. Just as we celebrate the advancements made in 70 years since the signing of the UDHR, we are also outraged that it is also almost 70 years since China invaded or took control of Tibet, East Turkestan and Southern Mongolia, and during these decades of occupation we have witnessed wave after wave of resistance to China’s brutal rule in myriad ways, including by a new generation, raised entirely within the Chinese system with no memory of freedom, risking everything to demand their human rights.

And this is the paradox of repression: the more the authorities try to suppress and control people through intimidation, coercion and violence, the more their desire for freedom and their resistance will grow. We have seen this to be true time and time again; and as much as those occupied nations have served as China’s laboratories of repression, they have also been laboratories for resistance, where creative non-violent strategies and tactics of defiance are being tested by some of the most courageous people in the world.

It is time for the international community  to follow their example and stand up to the Chinese government. Put simply, like-minded world governments need to get together and formally engage in joint initiatives to defend Tibetans, Uyghurs, Mongolians, Chinese, Taiwanese and Hong Kongers – taking action together to defend human rights, democracy and free speech and stand up to Beijing as one. If they do it will be far more difficult for China to retaliate in the ways we have seen them act in the past.

If those who live directly under China’s rule can, time and time again, stand up to one of the most powerful nations on earth led by a violent regime – can’t the rest of the international community do more?