[Taipei] International Tibet Network’s Secretariat is outraged at the two year sentence given to Jiang Tianyong (江天勇), the prominent Chinese human rights lawyer who has defended many high profile Chinese and Tibetan political prisoners. Jiang Tianyong had disappeared in November 2016. On 22 August 2017 he appeared in Court in Changsha, Hunan Province, pleading guilty to “inciting subversion of state power”. Video widely publicised showed Jiang Tianyong voicing deep remorse at his actions, [1] leading his wife and friends to suspect his confession had been forced and may have been the result of torture in custody. His wife, Jin Bianling, called the “sham” trial and sentence “unacceptable”.

“We share the concerns of international human rights commentators that the trial of Jiang Tianyong was a sham and are outraged at his two-year prison sentence” [2] said Penghsuan Lee, International Tibet Network’s East Asia Regional Coordinator. “The wide publicity and staging of his trial is clearly intended to send a strong message to all of China’s citizens that the Party will not tolerate dissent. We express our support to his wife and friends in their continued efforts to secure his immediate release.”

Human Rights Watch reported that – before he disappeared last November – Jiang Tianyong warned friends: “If I say things I don’t mean to when I am in jail, please must forgive me. …[Being tortured] was so painful.” [3] He vanished on his return from a visit to the family of Xie Yang, a human rights lawyer held in custody in Changsha. In March 2017, he appeared on TV “confessing” to helping Xie Yang fabricate stories of torture.

In Jiang Tianyong’s 12 years as a human rights lawyer, he represented prominent activists such as Gao Zhisheng (高智晟) and Chen Guangcheng (陈光诚), and many politically sensitive cases [4], as well as Tibetans in Tibet. In 2008, along with 16 other lawyers, he publically offered legal services to Tibetans charged in the 14 March Uprising. [5] This led to the suspension of his lawyer’s license in 2009. In 2010 he represented Phurbu Tsering Rinpoche [6] and Labrang Jigme Guri in 2011. [7]

“We hope that international concern about Jiang’s sentencing will lead to his immediate release,” said Tenzin Jigdal, International Coordinator of Tibet Network. “China’s government has to fulfil its commitment to rule of law, and the prosecution of a human rights defender deserves substantial condemnation.”

This is not Jiang’s first disappearance and detention: In 2011, he was kidnapped by the police and disappeared for two months during which he was subjected to  torture. Later in 2012, he was harshly beaten by the police due to his visit to human rights activist Chen Guangchen. [8] It led to the hearing in his left ear being impaired. In March 2014, he and many lawyers, citizens and family visited Jiansanjiang black prison in Heilongjiang and were detained afterward. The brutal acts of police have caused fractures to eight ribs. [9] 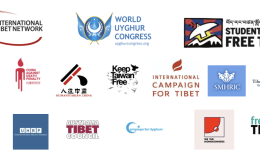