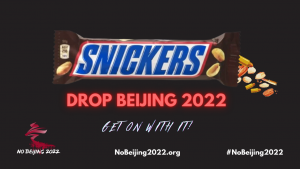 We, a coalition of over 200 global campaign groups, are writing to follow up on an unanswered letter sent to you in January 2021. Our growing coalition is again raising serious concerns that Mars Wrigley’s brand Snickers have signed on as official sponsor for the Beijing 2022 Winter Olympics, and we urge you to carefully reconsider this decision and immediately cancel the sponsorship.

In less than a year the Beijing 2022 Winter Olympic Games will open, against a backdrop of severe repression and worsening human rights. According to the Chinese authorities, this prestigious event will be “open” and “inclusive”, create a “harmonious world” and promote “social progress”. But for those living under China’s rule the reality is far from inclusive, open and harmonious; instead daily life is characterized by a brutal crackdown on cultural diversity, a tearing apart of community cohesion and closed doors to human rights monitors and international media who have been desperately trying to document the worsening crackdown.

As you will no doubt be aware, the human rights situation for those living under China’s rule has reached an unprecedented low. The situation in occupied Tibet has dramatically deteriorated and in January 2021, it was listed as the worst place in the world for civil and political rights, alongside Syria. At least two million Muslims – including Uyghurs, Kazakhs and Uzbeks – are locked in “re-education camps” undergoing systematic torture, rape and political re-education.

The Chinese government’s lack of openness and commitment to societal progress has been further exemplified by its crackdown in Hong Kong, where Beijing has implemented a draconian National Security Bill for Hong Kong that bans acts of “splittism, subversion, foreign intervention, and terrorism”, in its latest effort to curtail any remaining human rights of those living under Chinese rule. Meanwhile, China continues to jail more journalists than any other country in the world, making it difficult to reconcile the Chinese government’s claims that the Games will be characterised by a spirit of ‘openness.’

A letter from Human Rights Watch to the International Olympic Committee recently raised the fact that the 2022 Games will take place in a human rights environment significantly worse than that of 2008 when the Chinese government repeatedly backtracked on the human rights pledges it made to secure the right to host the Games.

As groups dedicated to the protection of human rights and best business practices, we applaud the company’s strong public endorsement of human rights policies and practice and commitment to “building strong human rights partnerships”. Unfortunately, the government of China is not a viable or qualified candidate for such a partnership, and Snickers should not side step those values to reap the financial rewards that come with sponsoring a major sporting event taking place against the backdrop of a genocide.

Given the importance of our concerns, we deeply regret that we are yet to receive a response from you to the previous letter sent over two months ago. Your lack of response only further heightens our fears that your company may knowingly compromise on its public commitments to human rights, in exchange for access to the Chinese market. These concerns are particularly troubling given that Snickers already served as the official sponsor for the 2008 Beijing Summer Games, when China led a brutal human rights crackdown in the lead up to – and during – the Games which was broadcast for the world to see.

We urge you to immediately cancel your sponsorship of the Beijing 2022 Olympic Games, or risk being tainted by association. By terminating this agreement, Mars Wrigley has an opportunity to send a clear message that it will not tolerate dealing with governments that profit from occupation, genocide and human rights violations and to make a real difference to the lives of those living under Beijing’s tight grip.

We request the opportunity to meet with you and other representatives of Mars Wrigley to discuss our serious concerns regarding China’s attempt to use Beijing 2022 to “sport wash” the situation facing Tibetan, Uyghur, Hong Kong, Southern Mongolian and Chinese freedom activists. Please contact Mandie McKeown at mandie@tibetnetwork.org to discuss arranging this meeting.

and the following organisations:

We can direct your media inquiries to the right person.
This site uses cookies: Find out more.