Medal Of Courage 2018 Awarded to Dhondup Wangchen and Golog Jigme

Medal Of Courage 2018 Awarded to Dhondup Wangchen and Golog Jigme 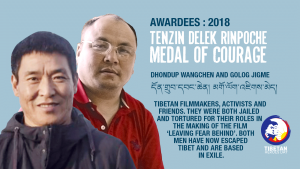 Two courageous and tireless Tibetan human rights advocates have been awarded the 2018 ‘Tenzin Delek Rinpoche Medal of Courage’ [1] for their extraordinary determination and commitment to defending the rights of the Tibetan people who continue to live under a brutal Chinese occupation. Dhondup Wangchen and Golog Jigme will be awarded the ‘Medal of Courage’ (in absentia) at an event held in Tokyo, Japan today, 12 July 2018.

Dhondup Wangchen and Golog Jigme, Tibetan film-makers, former political prisoners and human rights advocates, were behind the film “Leaving Fear Behind”, [3] a documentary film made in 2008 to give voice to Tibetans in the run-up to the Beijing Olympic Games.

Both men were detained by Chinese authorities in Tibet in March 2008 for their part in making the film. Dhondup Wangchen was sentenced to six years in prison for “inciting subversion” and Golog Jigme suffered multiple detentions; both men encountered periods of intense interrogation and torture, including electrocution. After release both men remained under strict surveillance with their movements and communications constantly monitored. Their bravery led to both men, on separate occasions, successfully evading the authorities to flee from Tibet into exile.

Dhondup Wangchen and Golog Jigme said they were deeply honoured to be heralded  with the Tenzin Delek Rinpoche Medal of Courage and that they were accepting it on behalf of all the organizers of the Leaving Fear Behind documentary project.

In video messages the awardees said:
Dhondup Wangchen: “Whilst I was in prison in Tibet I was very much aware of the effort to support me and press for my release.” He continued “It is so important to continue to advocate for all the Tibetan political prisoners as these efforts are instrumental in not just saving the Tibetan political prisoners from torture in Chinese prison but also their lives.”

Golog Jigme: “On behalf of all the organizers of the Leaving Fear Behind documentary project, Dhondup Wangchen and I would like to convey their deepest thanks to International Tibet Network and all the Tibetan supporters who have continued to steadfastly supported the Tibetans cause.” He continued “ I would also like to convey to all the other people in Tibet involved in this project including my father, that it is because of your courage and dedication that we are being presented this award today. The courage and relentless efforts [of Tibetans in Tibet] towards our project have been instrumental in highlighting the reality of Tibet and thereby garnering international support and attention. This award is an important recognition of their collective work and thereby each one of them should now strive to work even harder. This recognition and award wouldn’t be possible without their courage and dedication.”

The ‘Tenzin Delek Rinpoche Medal of Courage’, an annual award, is given to Tibetan human rights defenders who show deep commitment to enhancing the freedom and rights of the Tibetan people at great personal risk. The aim of the award is to provide protection to such individuals through international recognition. The award is being presented on 12 July 2018, marking the 3rd anniversary of the untimely death of Tibetan spiritual leader Tenzin Delek Rinpoche while in Chinese custody.

Tsering Dorjee, from Students for a Free Tibet Japan, said “I am truly honoured to present the Medal of Courage to these two great Tibetan heroes. They have worked tirelessly and courageously to stand up for justice for the Tibetan people against all the odds, putting themselves in grave danger and making great personal sacrifices to bring attention to the truthful, shocking situation in Tibet.”

“I am delighted to see the ‘Tenzin Delek Rinpoche Medal of Courage’ awarded to Dhondup Wangchen and Golog Jigme today; their determination to expose the true thoughts and feelings of the Tibetan people is something that was dear to my late uncle’s heart”, said Nyima Lhamo, niece of Tenzin Delek Rinpoche. [3] “The Chinese government has a long history of harsh treatment of those who speak out against its failing policies. In 2015 my uncle died after spending over 13 unjust years in Chinese custody despite the fact that we had applied for due medical parole. Today the world is watching as China continue to treat those who call for freedom and basic human rights with huge disdain and I appeal to the international community to firmly hold China accountable for the treatment of its critics.”

Tenzin Jigdal, International Tibet Network, said, “Dhondup Wangchen and Golog Jigme have shown enormous tenacity in their actions to progress the fundamental rights of the Tibetan people; a tenacity found so threatening by China that despite their non-violent actions both men were treated severely by Chinese authorities.”

“By honoring Dhondup Wangchen and Golog Jigme, we pay tribute to their enormous personal courage and dedication to the rights of the Tibetan people. We also pay tribute to the thousands of other Tibetans in or from Tibet who have spent years of their lives unfairly imprisoned or detained for the important role they have played in the struggle for Tibetan freedom”, said Mandie McKeown, Campaigns Coordinator, International Tibet Network.

The ‘Medal of Courage’ award is given to further highlight the situation of Tibetan human rights defenders. [4] The Judging Panel is made up of International Tibet Network Steering Committee Members, Geshe Nyima (Tenzin Delek Rinpoche’s cousin), and other human rights experts.

For more information about Dhondup Wangchen, Golog Jigme and the film ‘Leaving Fear Behind’ visit http://www.filmingfortibet.org/

For images from the award ceremony contact: Tenzin Jigdal, jigdal@tibetnetwork.org

NOTES TO THE EDITOR: