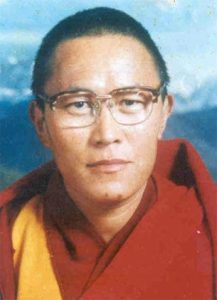 Today we mark six years since the untimely death of Tenzin Delek Rinpoche, a highly respected Tibetan lama known for his advocacy for Tibetan communities and the environment. Tenzin Delek died under mysterious circumstances in a Chinese prison after spending 13 years behind bars for a crime he did not commit.

The cause of Tenzin Delek Rinpoche’s death is still unknown. Serious concerns about his health, due to ill-treatment in prison, led to repeated calls by campaigners and governments for his release. Despite him being entitled to medical parole, China refused to release him.

After he died, his body was cremated against his family’s wishes, and in contravention of China’s own new regulation on the handling of deaths in prison.

Tenzin Delek Rinpoche, from Lithang, Kham, Tibet (CH: Ganzi, Sichuan Province), was one of the very highest profile political prisoners detained by the People’s Republic of China. His untimely death spotlights not only the torture and horrific conditions that Tibetan political prisoners face when detained by the Chinese authorities, but the efforts the government will go to control and silence Tibetan voices.

Tenzin Delek’s strong influence in his community and his efforts to preserve Tibetan identity caused the Chinese authorities to view him as an enemy and as a threat to their control. Over the course of a decade, he was the target of harassment and intimidation by Chinese officials.

Under illegal occupation, Tibetans rights have been abused without impunity for over seven decades, and no accountability given for the persecution and death of Tenzin Delek Rinpoche or countless other unaccounted for deaths of Tibetans in or after release from custody.
We call on governments, the United Nations, and other international bodies to step up their condemnation of China’s policies and illegal occupation of Tibet, and pressure the Chinese government to respect Tibetans’ rights.

Furthermore, we call on governments, the International Olympic Committee and National Associations, and Olympic sponsors to boycott the Beijing 2022 Olympic Games due to China’s human rights atrocities

BACKGROUND:
Tenzin Delek was arrested in April 2002 and wrongfully charged with “crimes of terror and incitement of separatism”. His conviction was based on a confession obtained under torture by his alleged co-conspirator Lobsang Dondrup – who was subsequently executed – and no other evidence was offered.

Tenzin Delek Rinpoche was given a suspended death sentence, commuted in 2005 to life in prison, for “causing explosions and inciting the separation of the state.” He steadfastly maintained his innocence at all times and categorically denied the charges, saying “I always said we should not so much as raise a hand against another.”.

To date, no court documents have been released, shrouding the proceedings in secrecy. Tenzin Delek Rinpoche, who is also understood to have been tortured, steadfastly maintained his innocence at all times

International Tibet Network, a coalition of over 120 Tibet related organisations, has campaigned internationally on behalf of Tenzin Delek Rinpoche ever since his arrest. In Tibet, local people held protests and 40,000 joined a petition for his release. The suspended death sentence was commuted to life imprisonment and later reduced to 20 years. In 2014, his family members applied for medical parole; a request China had not responded to at the time of his death.