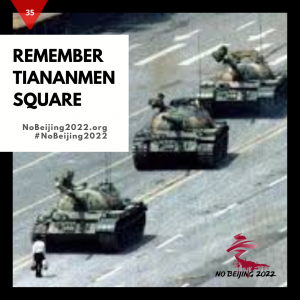 International Tibet Network Members are today joining the commemoration of the 32nd anniversary of the 4 June Tiananmen Square Massacre when the Chinese People’s Liberation Army opened fire on tens of thousands of pro-democracy demonstrators killing untold numbers of peaceful protesters and bystanders.

In the weeks leading up to 4 June students, democracy activists and workers had peacefully gathered in Tiananmen Square, and other Chinese cities, protesting against the ruling Party, calling for freedom of expression, accountability, and democracy.

We will always remember this catastrophic event and the bravery of all those who took part in the freedom protests of 1989.

Three decades on the human rights situation for all who live under China’s rule has hit an all-time low and repression across all regions and occupied territories. At least two million Uyghur, Kazakh, and Uzbek Muslims are currently incarcerated in “re-education camps” undergoing systematic torture, rape, and political re-education. In Hong Kong, the Chinese government has implemented a draconian National Security Bill that is being used to criminalise protests and even mild criticism of the Chinese government. The situation in illegally occupied Tibet has deteriorated dramatically over the past decade and in January 2021, it was listed as the worst place in the world for civil and political rights, alongside Syria. Protests by Southern Mongolians, who are seeing their language and culture being eradicated, are put down with force.

As in previous years, authorities have been on high alert ahead of the anniversary to preempt commemorations of the massacre. Freedom is curtailed for anyone deemed a dissident or with links to the Tiananmen Square Massacre including members of Tiananmen Mothers, a group of relatives of Tiananmen Massacre victims.

In Hong Kong police have banned a vigil marking the Tiananmen Square crackdown for the second year in a row. The ban in 2020 was the first time in 30 years the vigil was deemed illegal.

We pay tribute to the enduring courage of those who continue to resist China’s draconian rule and we urge the international community to show not only that it will never forget the atrocities of the past, but that it will stand up against the flagrant disregard for fundamental human rights. We call on governments to join together to call on China to;

In recent months world governments have become increasingly robust in the actions taken against China’s human rights abuses. But more needs to be done to ensure the international community response matches the courage and conviction of those who resist China from within.