Tibetan activist and political prisoner, Tashi Wangchuk, denied a visit with his lawyer ahead of the three year anniversary of his detention 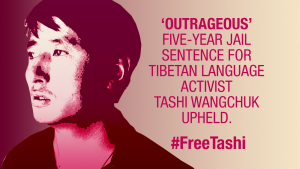 27 January 2019 is the third anniversary of the detention of Tibetan political prisoner and language rights activist, Tashi Wangchuk, currently serving a five year sentence for the highly politicised charge of “incitement to separatism.”

News has emerged that Tashi Wangchuk is currently being denied access to his lawyer. On 15 January 2019, lawyer Lin Qilei (蔺其磊) attempted to visit Tashi at Dongchuan Prison, Xining in Qinghai, to discuss his dissatisfaction with the original judgment and appeal, and his wish to file a new petition to the Supreme Court. [1] On arrival, his lawyer was told that his request to meet with Tashi needed to go via the Internal Investigations Department. Despite following this procedure, his application was denied. The Head of Department, Yang Dong (杨栋), informed Lin Qilei that “higher level” permission was required due to the “sensitive” nature of Tashi Wangchuk’s crime. Lin Qilei has promised that he will shortly be contacted with an update.

Since his trial, Tashi Wangchuk has only been allowed three family visits. Directly after Tashi’s first appeal hearing in August 2018, his family were able to meet with him but, when they attempted to bring him some clothes the following day, they were told that Tashi had already been moved to Xining. His siblings were able to visit in November 2018 but are currently waiting for permission for a further visit.

Tashi Wangchuk, a businessman aged 34, was detained on 27 January 2016. His arrest came less than two months after he featured in a New York Times article and video report were he discussed his formal complaint against Chinese officials for failing to support Tibetans’ right to Tibetan language education. [2] Tashi was held for two years without trial and his lawyers had limited access to him during his pre-trial detention. In May 2018 he was sentenced to a five year prison sentence on charges of “incitement to separatism”.

“Tashi Wangchuk’s detention and sentence are entirely politically motivated, and it is a complete outrage that not only does he remain behind bars despite his innocence, but that the Chinese authorities are even denying his fundamental rights to legal representation” said Dorjee Tseten, Executive Director of Students for a Free Tibet. “His plans for a petition to the Supreme Court are a testament to his remarkable spirit and determination not to give up fighting this travesty of justice, and we commend his courage.”

“Tashi made his complaint about the lack of Tibetan language teaching in schools entirely legally and at all times acted within Chinese constitution, He has not committed any crime. The delays throughout case demonstrate that the authorities know that they had no basis for arresting or imprisoning him. The only solution to this ongoing injustice is to grant his immediate release,” added John Jones, Campaigns Manager, Free Tibet. “We support his efforts unreservedly, and to mark the third anniversary of his detention, Tibetans, Tibet supporters and global civil society groups around the world are calling for his immediate and unconditional release.”

Tashi Wangchuk was tortured during the first weeks of his detention, when he was held for lengthy periods in a ‘tiger chair’, subjected to sustained and arduous interrogation, and suffered repeated beatings by Chinese guards. Furthermore, the Chinese authorities threatened to harm his family during this period.

Two years after he was initially detained, Tashi Wangchuk was tried in a closed door trial to which his family, foreign diplomats and the media were barred. [3] Despite explicitly stating that he was not calling for Tibetan independence, Tashi Wangchuk was charged with the highly politically motivated ‘offence’ of “incitement to separatism”, a charge that “criminalize(s) the legitimate exercise of freedom of expression and his defense of cultural rights”, according to UN experts.

Since being detained, numerous governments have expressed concern about his detention and treatment by the Chinese authorities. Most recently, in November 2018, the United States and the United Kingdom raised strong objections to Tashi’s detention during China’s United Nations Universal Periodic Review and urged publicly for his immediate release.

At least eight independent United Nations human rights experts have also, on multiple occasions, raised questions with the Chinese government about the legal grounds for Tashi Wangchuk’s detention and his treatment while in Chinese custody.  The experts have asked China to provide information as to why the charge of “incitement to separatism” links to his work calling for linguistic rights, and what measures are being taken by the Chinese government to ensure “the free exercise of the rights to freedom of opinion and expression and freedom to take part in cultural life” in Tibet.

We are in no doubt that Tashi Wangchuk’s activism has been criminalised by China for shedding light on the State’s failure to protect the basic human right to education and specifically Tibetan language education.

We urge governments to step up their calls to China for Tashi Wangchuk’s immediate and unconditional release.