Tibet movement mourns the passing of an innocent Tibetan hero, Tenzin Delek Rinpoche, who has died in a Chinese prison.

International Tibet Network calls on world governments to help the family recover his body, and press China for a full investigation into his detention and death. 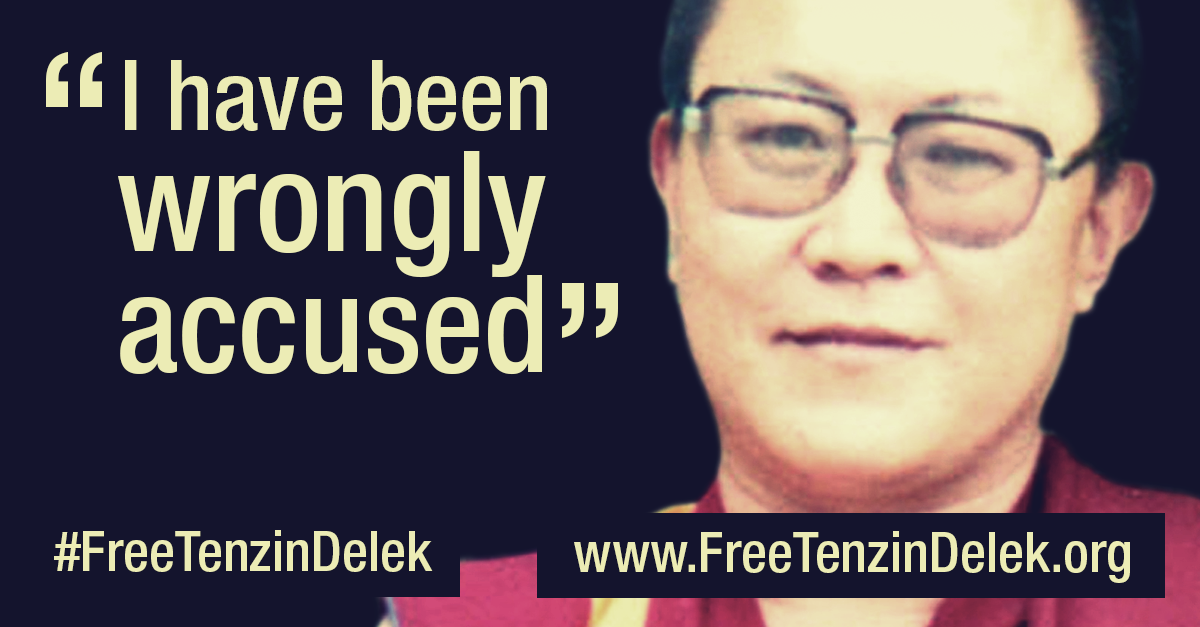 Tenzin Delek Rinpoche, a highly respected Tibetan lama recognized by His Holiness the Dalai Lama, has died in a Chinese prison after spending over 13 years imprisoned for a crime he did not commit. His family were informed on 12 July 2015 of the death by police in Chengdu, Sichuan Province. Tenzin Delek Rinpoche was known to be in extremely poor health with a serious heart condition and high blood pressure; he was eligible for medical parole, for which his family had made an official application in 2014. The specific cause of his death is not known.

Geshe Nyima, Tenzin Delek Rinpoche’s cousin, based in Dharamsala, India, told Students for a Free Tibet [1]: “I am heartbroken at the loss of my dear cousin and our beloved Buddhist teacher. Tenzin Delek Rinpoche was an innocent monk who suffered over 13 years of unjust imprisonment, torture and abuse in a Chinese prison for simply advocating for the rights and well-being of his people and for expressing his devotion to His Holiness the Dalai Lama. The Chinese government must immediately release his body so that our family and community may perform the last Buddhist religious rites.”

Dhardon Sharling, Chair of International Tibet Network [2] said: “Tenzin Delek Rinpoche has died a Tibetan hero; one of the very highest profile political prisoners detained by the People’s Republic of China. His untimely death throws a spotlight on the torture and horrific conditions that Tibetan political prisoners face when detained by the Chinese authorities. The international community cannot allow China to escape censure for this tragic loss of an innocent man, especially at a time when Beijing is bidding to become an Olympics host once again. [3] We urge the many governments that recognised the importance of Tenzin Delek Rinpoche’s case to support his family’s efforts to recover his body and to demand a full investigation into the circumstances of his detention and death.”

When his influence and advocacy for Tibetan communities, culture and for the environment drew the attention of Chinese officials, Tenzin Delek was arrested in April 2002 and wrongfully charged with “crimes of terror and incitement of separatism”. His conviction was based on a confession obtained under torture by his alleged co-conspirator Lobsang Dondrup – who was subsequently executed – and no other evidence was offered. To date, no court documents have been released, shrouding the proceedings in secrecy. Tenzin Delek Rinpoche, who is also understood to have been tortured, steadfastly maintained his innocence at all times. [4]

The Tibet movement has campaigned internationally on behalf of Tenzin Delek Rinpoche ever since his arrest. In Tibet, local people held protests and 40,000 joined a petition for his release. The suspended death sentence was commuted to life imprisonment and later reduced to 20 years. In 2014, his family members applied for medical parole; a request China had not responded to at the time of his death.

Free Tibet [5] is reporting that security forces are being deployed to deal with large gatherings of Tibetans at Tenzin Delek Rinpoche’s former monastery. International Tibet Network is gravely concerned that the local community’s grief at Tenzin Delek’s passing, and frustration at the authorities’ failure to release his body to relatives may be brutally crushed.

Mandie McKeown, International Tibet Network’s Campaigns Coordinator said: “The passing of Tenzin Delek Rinpoche is a tragedy that China must urgently be held accountable for. The torture and ill-treatment he has endured since his detention, and the mental anguish of knowing he was innocent of such outrageous charges are things that no-one should suffer. For too long China has occupied Tibet and abused the rights of the Tibetan people with impunity. This tragic outrage must make our governments step up their condemnation of China’s policies in Tibet, and make IOC members think again about awarding Beijing the 2022 Winter Olympics.”