Tibet and Uyghur Groups Stand in Solidarity with Hong Kong

Tibet and Uyghur Groups Stand in Solidarity with Hong Kong 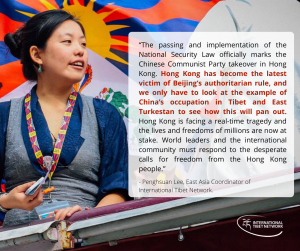 International Tibet Network and World Uyghur Congress strongly condemns the Chinese government’s passing of a National Security Law for Hong Kong without the consultation of the people of Hong Kong; a grave turning point for freedom in Hong Kong and a violation of binding international legal obligations under the 1984 Sino-British Joint Declaration.

This latest imposition is a further consolidation of Beijing’s power. We express our extreme concerns over the rapid erosion of Hong Kong political freedoms and echo fears that this new draconian law will only be used to trample human rights and lead to the severe repression of all dissenting voices. The speed at which the Chinese authorities have imposed this law also signals Beijing’s eagerness to clamp down on pro-democracy activists ahead of elections in Hong Kong in September, further tightening its grip. Under the law, Hongkongers convicted of “national security crimes” could risk life imprisonment.

“The passing and implementation of the National Security Law officially marks the Chinese Communist Party takeover in Hong Kong,” said Penghsuan Lee, East Asia Coordinator of International Tibet Network. “Hong Kong has become the latest victim of Beijing’s authoritarian rule, and we only have to look at the example of China’s occupation in Tibet and East Turkestan to see how this will pan out. Hong Kong is facing a real-time tragedy and the lives and freedoms of millions are now at stake. World leaders and the international community must respond to the desperate calls for freedom from the Hong Kong people.”

The people of Hong Kong, particularly the youth, have shown the desire for fundamental rights and freedoms cannot be crushed, no matter how ruthless China becomes. China’s failure to honour its commitment to the ‘One-country, Two-systems’ agreement has awakened a whole new generation of Hongkongers striving for a truly democratic society.

‘’The Chinese Communist Party is undermining the autonomy, human rights and freedoms of the people of Hong Kong before our very eyes. If something is not done, Hong Kong may suffer the same brutal treatment as Uyghurs and Tibetans. Enough is enough, the international community must take action, for all of our sakes,” said Dolkun Isa, President of the World Uyghur Congress.

“These blatant actions by Beijing have far reaching consequences and pose an extreme risk which requires more than mere lip-service; world leaders and Asian nations must come together and enforce punitive measures to protect the people of Hong Kong,” said Tenzin Jigdal, International Coordinator for Tibet Network.

We call on World Governments to immediately:

We call on the UK government specifically, as the co-signatory to the Joint Declaration, to take concrete steps to ensure the effective implementation of treaty obligations, including invoking any remedies under international treaty law.

We call on United Nation Member States to immediately: