In a press statement released today, the experts expressed deep concern about “the criminalisation of the legitimate work” of A-Nya Sengdra highlighting that his case can be seen to be part of “a wider crackdown on Tibetan” human rights defenders. The UN experts urged the Chinese Government to comply with international law and lift “the charges against Mr Sengdra.” 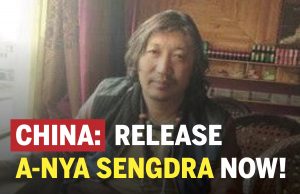 On 6 December 2019, A-Nya Sendgra was sentenced to seven years imprisonment in a closed trial after he was found guilty of ‘picking quarrels and provoking trouble’ and ‘gathering people to disturb public order’ by a court in Golog Prefecture, Amdo, eastern Tibet. [3] A-Nya Sendgra is awaiting his appeal hearing, which was due to take place on 27 April 2020 but was postponed. The UN experts expressed concern that he is known to have serious health issues and is being held in extremely poor conditions.

Padma Dolma, Co-Coordinator of Tibet Advocacy Coalition [4], said: “The detention and sentence of A-Nya Sendgra are entirely politically motivated to intimidate the Tibetan people and their identity and the Chinese authorities must heed calls by UN experts, and the international community, to immediately and unconditionally release him and cease the criminalisation of Tibetans for peacefully exercising their human rights. ”

A-Nya Sengdra has campaigned against government corruption and environmental destruction caused by illegal mining activities and endangered animal poaching. He was sentenced on accusations of hosting two WeChat [5]  groups with words that included “anti-corruption” and “environmental protection’’. Amidst the coronavirus outbreak, further crackdowns on Tibetans using WeChat have been reported, including the detention of at least three individuals. [6]

“China’s widespread attempts to criminalise Tibetans legitimate activities must be seen for what they are; blatant abuses of an authoritarian government hell bent on stamping out any criticism of the failed Tibet policies,” said Lobsang Yangtso from International Tibet Network.

John Jones, at Free Tibet said: “This intervention from five United Nations experts is a necessary counterweight to China’s rampant disregard for human rights in Tibet. Tibetans like A-Nya Sengdra are regarded as heroes in their community for their willingness to challenge wrongs such as environmental destruction and government corruption. It is this bravery that has caused Chinese authorities to panic, to detain, mistreat and sentence him to prison after a sham trial. China must heed the call of these experts, release A-Nya Sengdra and listen to Tibetans’ calls for human rights and freedom”.

A-Nya Sengdra was arrested on 4 September 2018 by Chinese security forces in Gade County. He was held in incommunicado detention for 48 days, without access to a lawyer, and during this time, he reported being beaten in custody. He was held in pre-trial detention 14 months before he was sentenced [7]. His detention period was extended several times between 2018 and his trial and a request by his lawyer for bail was rejected.

The arrest and sentence of A-Nya Sengdra takes place amid a renewed crackdown against the Tibetan people by the Chinese government. On 1 May 2020, new regulations came into effect in Tibet which makes ‘ethnic unity’ in Tibetan government and social institutions mandatory. The law grants the Chinese authorities sweeping powers to round up and sentence Tibetans for the vague and overly broad offence of ‘undermining ethnic unity’ and sets out punitive measures for individuals ‘spreading rumours’, ‘producing information’ or ‘holding a stubborn or determined attitude’.

Gloria Montgomery from the Tibet Advocacy Coalition said “The Chinese authorities have exploited the definition of ‘terrorism’, ‘separatism’, ‘extremism’ and ‘undermining ethnic unity’ to encompass peaceful protests, the sharing of information online and legitimate activities, resulting in peaceful Tibetan activists being treated as enemies of the state.” She added, “The Chinese government must repeal all oppressive laws being used to clamp down on dissent, and urgently end human rights violations being used to stifle Tibetan civil society.”

2a. Tibetans as an ‘ethnic minority’: The People’s Republic of China claims Tibetans are among 55 ethnic nationalities bound together by a common destiny (2b). This fabrication, rooted in China’s deep historical ethnocentrism, became the foundation for China’s colonization of Tibet and other neighboring territories (2c). Tibet is not only a clearly defined nation, but the government of Tibet fulfilled the criteria of a sovereign state three decades before the founding of the PRC. Prior to the invasion, Tibetans and Chinese had little to no contact and China did not formally exercise control over Tibet (2d). China’s leaders however classified Tibetans as ‘barbaric uncivilized’ peoples that should be ‘assimilated or eliminated’ (2e). Tibetans, fiercely proud and independent, showed no signs of assimilating and thus the CCP pursued policies to eliminate the Tibetan nation. Read more at http://www.chinasfailedtibetpolicies.org/#

4. Tibet Advocacy Coalition is a project developed to increase Tibet advocacy at the United Nations. The Coalition is convened by Tibet Justice Centre and International Tibet Network with core members Students for a Free Tibet, Tibet Initiative Deutschland and Tibetan Youth Association Europe.