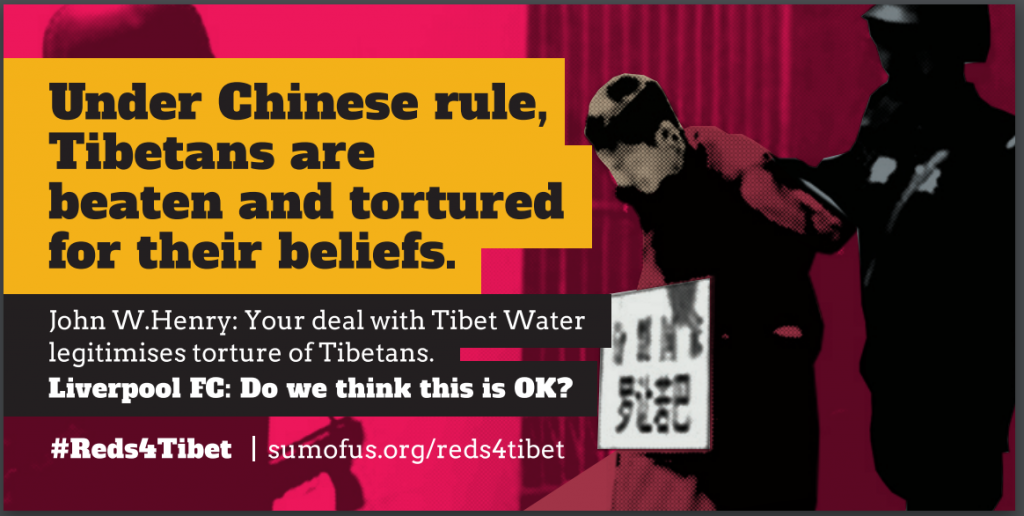 A campaign led by Tibet groups and international consumer group SumOfUs is raising awareness about the wide-ranging negative impacts of the partnership between Liverpool FC and the Chinese water company, Tibet Water Resources. This Sunday 14 January, before its match with Manchester City, a mobile billboard targeting owner John W. Henry will take to the streets of Liverpool, urging him to drop the controversial deal with Tibet Water.

The ad will read: ‘’Under Chinese rule, Tibetans are beaten and tortured for their beliefs. John W. Henry: Your deal with Tibet Water legitimises the torture of Tibetans. Liverpool FC: Do we think this is okay?”

Tibetans, Tibet supporters and Liverpool FC fans will also hand out information to supporters before Liverpool FC’s match with Manchester City on Sunday.

• What: Mobile billboard will be in Liverpool displaying message to fans arriving at match, calling out Liverpool FC’s sponsorship deal with Tibet Water
• When: Sunday 14 January, 10 AM – 4 PM prior to the LFC v Manchester City match.
• Where: Central Liverpool and the Soccerbus route (between Sandhills Station and Anfield)
• Why: Campaigners will be engaging with fans heading to the match on this issue
• Who: Campaigners, fans and members of the local Tibetan community will attend
The campaign has been running since July 2017, when Liverpool FC announced on its website that it had signed an agreement with Tibet Water Resources Limited, a Chinese company that extracts and bottles water from occupied Tibet (1). The campaign calls specifically on Liverpool FC’s owner, John W. Henry, to terminate the deal due to Tibet Water’s presence in occupied Tibet,  a scene of grave human rights violations after  it was invaded by the Chinese army in 1950. A petition calling on Liverpool FC to scrap the deal has been backed by over 80,000 supporters (2).

Since the announcement of the agreement, Tibetans and Tibet advocacy organisations, including Free Tibet and Tibet Society, have repeatedly attempted to alert John W. Henry and Liverpool FC’s directors to the negative effects of a deal with a company exploiting resources in Tibet, which under Chinese occupation has become one of the most closed and repressive regimes on earth (3).

The deal, which makes Tibet Water Liverpool FC’s official regional water partner in China, offers the company a range of promotional and marketing rights, which campaigners argue could also have negative impact on  club’s international reputation.

In addition to contacting the club, Tibet organisations have attended Liverpool matches to hand out information to inform supporters about the deal. Liverpool FC fans have also contacted the club to express their concerns. Additionally, Liverpool FC supporters have contacted Free Tibet, pledging to get involved and to continue to push for the cancellation of the agreement.

The Liverpool FC  has taken stands against human rights abuses in the past,including modern day slavery and human trafficking, by displaying a statement on their website that “recognises that the respect for human rights is an integral part of its social responsibility”. Updated in January 2018, the statement commits the club to “undertak[ing] increased levels of due diligence on all proposed third parties prior to entering into agreement with them” (8).

“John W. Henry and Liverpool FC’s directors are now well aware of the objections to their dangerous deal. These objections come from Tibetans who want to protect their country and Liverpool fans who expect to see their club conduct itself ethically. As one of the largest and most prestigious names in the sport, Liverpool FC has a real chance now to set and example and show that human rights are more important than sponsorship deals. By scrapping this deal they can make a powerful stand that Liverpool FC will not tolerate any association with human rights abuses.”

“It is not enough to pay lip-service to human rights on one hand, while signing deals that undermine them on the other. Any meaningful claim by the directors of Liverpool FC to support human rights must be accompanied by concrete steps. Scrapping the deal with Tibet Water will signal that the club’s actions are consistent with the values it promotes, and that it is prepared to play its part in standing up for human rights. Its failure to do so is a stain on Liverpool FC’s global reputation. The international outcry over the partnership is a testament to the integrity of Liverpool FC fans, supporters and others who believe that the club should put the Tibetan people before profits. ”

Sondhya Gupta, Senior Campaigner at SumOfUs, said:
“It’s quite clear that thousands of people all over the world, including the club’s fans, don’t want Liverpool Football Club to be normalising the brutal Chinese regime in Tibet with this deal. Tibet Water owes its profits to the repression, torture and denial of basic political freedoms of the Tibetan people. Is that really something LFC wants to support?”

1. Liverpool FC’s press release about the deal can be found here: http://www.liverpoolfc.com/news/announcements/269478-lfc-announces-tibet-water-resources-ltd-partnership

3. The US-based human rights and democracy organisation Freedom House ranks occupied Tibet as the second worst place in the world for political rights and civil liberties, behind only Syria. Their 2017 report is available at: https://freedomhouse.org/report/freedom-world/2017/tibet.  See also Amnesty International, Annual report 2016/2017 – The State of the World’s Human Rights: https://www.amnesty.org/en/latest/research/2017/02/amnesty-international-annual-report-201617  and Human Rights Watch, World Report 2017 – China and Tibet:, https://www.hrw.org/world-report/2017/country-chapters/china-and-tibet

5. The podcast can be accessed here: https://theredmentv.com/2017/10/17/is-it-time-to-redefine-the-liverpool-way-liverpool-fc-podcast/

6. Tibet Water is one of a number of Chinese water bottling companies operating in Tibet with the backing of the Chinese government. In 2014, under an initiative called “Sharing Tibet’s Water with the world”, the regional government of the Tibet Autonomous Region (TAR) signed contracts with sixteen major companies to expand the water bottling industry in Tibet and, in November 2015, announced a new ten-year plan to expand the industry, with a target of 10 million tonnes of bottled water production by 2025. The expansion – a seventy-fold increase over the capacity in 2014 – is being incentivised with significant tax breaks to companies and a lower extraction fee for water than elsewhere in China.