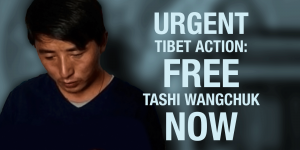 Tashi Wangchuk, a 32-year old Tibetan shopkeeper and advocate for the rights of Tibetans to learn and study in the Tibetan language, went on trial in Yushu, Tibet on 4 January 2018, charged with ‘inciting separatism’. The trial closed without a verdict being announced. He faces a possible sentence of up to 15 years.

A translation of an update about the trial, tweeted by Tashi Wangchuk’s lawyer Liang Xiaojun [1], reads: “The trial of Tashi Wangchuk in the crime of inciting separatism has ended, which took 4 hours from 9:30 to 13:30. The judge announced the court to be closed and the day of sentence will be chosen afterward. The trial was conducted in Mandarin, and the video “A Tibetan’s Journey to Justice” [by the New York Times, see Note 2] was screened to the court as evidence. Other related evidence was also shown. The prosecution, the defense and Tashi Wangchuk himself have all expressed their points of view. Tashi’s expression was very clear and his views were concise.”

“Tashi Wangchuk’s trial today is a complete outrage and we call on all those governments who have expressed concern about Tashi to urgently step up their efforts to secure his release. We especially appeal to French President, Emmanuel Macron, to raise Tashi Wangchuk directly with Xi Jinping when he visits China from 8 January”, said Alison Reynolds, International Tibet Network Executive Director. “Tashi Wangchuk is an innocent man who has already suffered nearly two years in detention for doing nothing more than advocating for rights which are meant to be protected by the Chinese constitution.”

Tashi Wangchuk was detained on 27 January 2016 after a New York Times article and video report [2] about his journey to Beijing to file a formal complaint against Chinese officials for failing to support Tibetans’ right to Tibetan language education. Despite the fact that he explicitly expressed in the report that he was not calling for Tibetan independence, Tashi Wangchuk was arrested and charged with the highly politically motivated ‘offence’ of “inciting separatism”, a charge that “criminalize(s) the legitimate exercise of freedom of expression and his defense of cultural rights”, according to UN experts. [3]

Tashi Wangchuk’s case has been raised by multiple governments, [4] and leading up to his trial Tibet Groups have been urging their embassies in Beijing to send representation to the court. Canada and the EU Delegation among others sent diplomats to Yushu. His case was also raised by five UN Special Procedures mandate holders, who jointly expressed “serious concern at the arrest, the initial incommunicado detention and the continued detention of Tashi Wangchuk, as well as his limited right to counsel, the denial of presenting the evidence against him and the irregularities in the criminal investigation”. [5] Tashi’s trial took place later than expected, with the Court previously taking the unusual step of sending the case back to prosecutors for more verification. [6]

Tashi’s lawyers, who had limited access to him during his pre-trial detention, reported that he was tortured and suffered extreme inhuman and degrading treatment during the first week of detention. He was initially held in for a lengthy period in a ‘tiger chair’ where he was subjected to arduous interrogation, and was repeatedly beaten by two Tibetan police officers. His interrogators threatened him with harming his family. [7]

“Tashi Wangchuk has shown enormous tenacity in his battle to progress the fundamental rights of the Tibetan people; a tenacity that China clearly finds highly threatening, despite his actions being entirely within the Chinese Constitution. Tibet Groups around the world are doing everything they can to press for Tashi’s safe and immediate, unconditional release. Every day that he remains in detention is a day when he is at risk of torture and inhumane treatment at the hands of the Chinese authorities,” said Mandie McKeown, International Tibet Network.

Chinese policies that undermine education in the Tibetan language run counter to provisions in China’s own laws, specifically the Regional Ethnic Autonomy Law. Protections for language and culture included in Chinese law are routinely not implemented in Tibet. These policies also violate the international right to cultural rights of Tibetans living under Chinese rule. [8]

Tashi Wangchuk was awarded the ‘Tenzin Delek Rinpoche Medal of Courage’ in July 2017, an annual award [9] given to Tibetan human rights defenders who show deep commitment to enhancing the freedom and rights of the Tibetan people at great personal risk. The award is named in honour of the late Tenzin Delek Rinpoche who died in custody after serving more than a decade in prison for a crime he did not commit.

[3] Communication by UN Special Rapporteurs covering a range of mandates including on torture, human rights defenders, freedom of religion, freedom of expression, cultural and minority rights and the Working Group on Arbitrary Detention. https://spcommreports.ohchr.org/TMResultsBase/DownLoadPublicCommunicationFile?gId=22981.

[8] See more on pages 11-15 of the Human Rights Action Plan for Tibet – https://issuu.com/internationaltibetnetwork/docs/itn_un_hrap-t_nobleed