Dr. Teng Biao, Chinese human rights lawyer and scholar: This outbreak of coronavirus and the way Chinese gov handles it completely reflected China’s governance failure. For example, Chinese government approved and organized major events even after the spread of the epidemic. Its arbitrary confiscation of emergency supplies, arbitrary detention during the mass quarantine, the fake statistics, and internationally, manipulating WHO, spreading conspiracy theories, exporting underqualified face masks and test kits, and using the export of medical equipment to pursue CCP’s political agenda, so on and so on.

But first and foremost, it is Chinese government’s coverup that made china and the world miss the best opportunity to prevent and control the epidemic.

The first case can be traced back to Nov. 17, 2019, and as early as December 27, it was confirmed to be a “novel coronavirus.” Xi Jinping and top Chinese leaders had already known the seriousness of coronavirus in early January or even late December, but they decided to hide the info because of its own political consideration.

The whistleblower, Dr. Li Wenliang was summoned and admonished by local police. Citizen journalists and activists Chen Qiushi, Fang Bin, Li Zehua, Xu Zhiyong, Guo quan, Ai fen and others, who posted the truth or comments about the epidemic through social media, were all arrested, detained or forcibly disappeared. China Human Rights Defenders (CHRD) has documented 897 cases involving Chinese Internet users penalized by police for their online speech about coronavirus. Hong Kong journalists were detained and their footage deleted. Dozens of foreign reporters were expelled.

In general, we have to realize that 1) Chinese authorities escalated suppression online and social control -The covid 19 is being used by CCP as a chance to strengthen its high-tech totalitarianism. And 2) CCP’s suppression of freedom, disinformation and mismanagement have caused significant delay of emergency responses and loss of life, not only in China , but all over the world.

Kyinzom Dhongdue, Executive Director, Australia Tibet Council: If we look at the situation in Chinese-occupied Tibet prior to the coronavirus, Tibetans were already living in a very repressive environment. Tibetans or the Tibet movement is all too familiar with whatever China is doing, whether it is the silencing of critical voices or the draconian measures infringing on basic human rights along with ramping up its propaganda machine. As a result, Tibetans have always lived in a climate of fear and anxiety.

You will remember that earlier this year Tibet has been rated the 2nd least free country in the world, only next to Syria

Now what is deeply troubling to see during this crisis is the further escalation of China’s crackdown in Tibet. For instance, Tibetans who were found sharing information about coronavirus or doing prayers to ward off the crisis have been arrested and penalised for sharing “rumours”.

So the danger we are seeing right now is how these heavy-handed measures can be normalised and even accepted. Our job is to ensure that the Chinese government under the pretext of combatting coronavirus, they do not intensify represssion in Tibet or other occupied territories in China.

These are unprecedented times for all of us. I hope that when the world comes out of this crisis, we have a world which is not the same as today’s world. That we have a much more compassionate world. Also a more honest and a more courageous world. As this crisis has exposed how interdependent we are with each other, I hope there is more empathy towards the suffering of others. And ultimately we have to come out of this crisis making China accountable. Ultimately we can go back to business as usual with China.

Zumretay Arkin, Program and Advocacy Manager, World Uyghur Congress: We are all familiar with China’s and CCP’s repressive policies against its own citizens, whether it is in occupied Tibet, occupied East Turkestan, and other parts of China. Since this COVID-19 outbreak, China has completely disregarded the lives of Uyghurs, by sending Uyghur doctors in Wuhan to dance for patients infected with COVID0-19. This is frustrating because the authorities regularly change their narrative on Uyghurs, sometimes portraying them as religious extremists or separatists, and sometimes portraying them as docile and content citizens, often exoticizing them. When Uyghur and Kazakh culture serves CCP interests, China uses it for damage control and pacifying public anger.

The other worrying aspect of this outbreak is the lack of information on the situation in East Turkistan and Tibet. According to Radio Free Asia’s reporting, any information related to COVID-19 was treated as a ‘’State secret’’ inside East Turkistan.

What is particularly worrying is the situation inside the camps, where since 2017, the Chinese authorities are holding between 1 – 3 million Uyghurs and other Turkic ethnic groups in internment camps, arbitrarily. We haven’t received any information on the conditions inside the camps, since the outbreak. Meanwhile, there were 500 confirmed cases in different prisons across China. The unsanitary conditions, which could be a breeding ground for the virus is alarming.

We must hold China accountable for its many crimes against humanity, including their response to this COVID-19 crisis.

Lobsang Gyatso, Digital Security Program Director for Tibet Action Institute: The Covid19 Pandemic for me has made me look at 3 systemic components of the Chinese government.

The first is Censorship and how the Chinese Government tried to censor the whistleblower Dr. Li Wenliang as highlighted by Teng Biao as well as the report by the Citizen Lab report which looked at Censorship on Wechat and YY in January and February this year, and they found out there was a wide breadth of information related to Covid-19 censored including criticism, speculative information and at the same time factual information related to the epidemic.

The second is a bit more complex which is the surveillance aspect such as the rise of contact tracing apps which was used in China during this crisis and its implications beyond this crisis for an ordinary Chinese Citizen. Another worrying trend is how other governments have started to deploy such kinds of apps without much scrutiny and able circumvent policies in place to protect individual freedom to respond to this pandemic.

The third is the disinformation campaign. An example of that is, the US Army bought the Virus to Wuhan when Zhao Lijian, Spokesperson and deputy director general at the information department of the Ministry of Foreign affairs tweeted a link to some research on March 12 and 13, 2019. To understand this, the Stanford research paper, “Coronavirus Conspiracy Claims: What’s Behind a Chinese Diplomat’s COVID-19 Misdirection” is a must read. This is just one example and probably many more will be unearthed in the coming days and months.

All these three components have been in existence in China and used by the Chinese government for a number of years against Tibetans, Ugyurs and Chinese Dissidents. The only difference is that now, we see these 3 components having an impact that is beyond China and global.

I want to take a step back and look at these three components before the Covid19 pandemic.

The Censorship aspect has been highlighted by numerous studies by various researchers on almost all Chinese Platforms. What has changed in the complicity of Global Tech companies such as Apple in its removal of VPN apps and the most recent one where they removed an encryption keyboard from the Chinese App store. All this was done in the name of complying with local laws.

In terms of Surveillance, I don’t need to reiterate anymore than what my fellow panelists have already spoken about. However, I just want to ask this question, how will these apps aptly called a “Trojan Horse” by some human rights groups be used for a common Chinese Citizen in the years to come in the same way that it has been used for Tibetans and Ugyurs.

As for disinformation, I would like to take you all back to the 2008 protest in Tibet where there was a wide spread of peaceful Tibetan protest marked by a few sporadic violent outbursts but it was largely peaceful. However it is referred as “2008 Tibetan Unrest” and how it is seen in China by common Chinese citizens doesn’t need an answer as if you look at the archive of the coverage of the protest, you will see how it has been covered. The disinformation campaign I shared earlier about the US army responsible for this virus seems far stretched(who would believe that) but I ask you to look at the 2008 protest and see how that narrative has been shaped globally.

The responsibility doesn’t lie with only the Chinese Government but global companies, UN organizations who have allowed China to change global norms around privacy and freedom of expression. How changing of these global norms had led to this Global pandemic and how to hold the Chinese government accountable and other technology companies and international organizations.

Dorjee Tseten, Executive Director, Students for a Free Tibet: What we are dealing with today is a human-made catastrophe. This global Coronavirus pandemic which started inWuhan, China could have been prevented if the Chinese Communist regime had made the right decisions on time. It could have been contained if whistleblower doctors like Li Wenliang and others had not been punished and censured for speaking the truth for the safety of everyone.

It is unfortunate that the world is now paying the cost of Beijing’s oppressive rule and repressive policies. After knowing all this, we cannot let Beijing continue to shut down discussions critical of the government’s mishandling of the outbreak. We must not let Xi Jinping rewrite the narrative of the global epidemic in order to retain power and glory. As much as we believe in the international community to work together during this crisis, it is imperative to holdChina accountable for this global disaster and also to stop future crises. The international community also needs to hold the World Health Organisation accountable for turning itself into a mouthpiece of the CCP and failing in its mission in keeping the world safe and serving the vulnerable.

Governments and the international community must listen to human rights experts and activists on the ground. If the coronavirus crisis taught us anything, it’s that repressive governments cannot be trusted to report accurate information during a crisis. 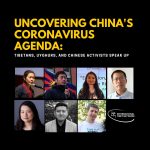 The panel was chaired by John Jones, Campaigns and Advocacy Manager, Free Tibet, and convened by International Tibet Network.