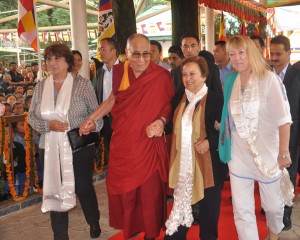 2014 has been a year of ups and downs for Tibet. We celebrated the release from prison of film-maker Dhondup Wangchen, and were overwhelmed with relief when his assistant, Golog Jigme, escaped from persecution in Tibet and arrived in India. We raised the roof when Nobel Laureates stood firm against China’s bullying and moved the World Peace Summit from South Africa (which had denied His Holiness a visa) to Rome so that the Dalai Lama could attend, and we applauded as Universities across the globe started to question the wisdom of accepting China’s Confucius Institutes.

But, as inspiring as these victories have been, we are reminded daily of China’s ever-rising power and the continuing brutal crackdown in Tibet. Can you help us support the six million Tibetans who live under this terrifying regime? www.tibetnetwork.org/donate

Sadly, the self-immolation protests in Tibet appear to be escalating again. Four Tibetans have set light to themselves in December alone, including a young woman named Tsepe (right) who died earlier this week, bringing to at least 136 the number of Tibetans to have undertaken similar protests against China’s occupation since 2009. China’s latest strategy is to launch “collective punishment” regulations that give authorities the power to punish entire communities that step out of line. And we were disappointed that Pope Francis declined to meet the Dalai Lama during his visit to Rome, anxious not to displease Beijing.

Despite these knocks, we stay strong in the knowledge that Tibetans in Tibet will never give up striving for justice and freedom; and neither must we. www.tibetnetwork.org/donate

A stronger, more effective Tibet movement is our best chance of securing more victories and challenging those who bow to China’s pressure. International Tibet Network was created for just this purpose. We bring together Tibet Groups around the world, support them as they plan strategic campaigns, give training in key advocacy skills and help them build their alliances with others.

And in 2015 there is a lot of urgent work to do! In the coming year His Holiness will celebrate his 80th birthday, China will once again bid to host the Olympic Games (Winter Olympics 2022), and there will be a major opportunity at the Paris Climate Negotiations to highlight Tibet’s nomads.

But it’s still a struggle to find the resources to give the Tibet movement the help it so urgently needs. This feels like a critical moment, for so many reasons. Please help us to meet the challenges ahead, with a gift to support the aspirations of Tibetans in Tibet – who give us six million reasons to hope – www.tibetnetwork.org/donate

Statement about Tibet Network’s use of Zoom