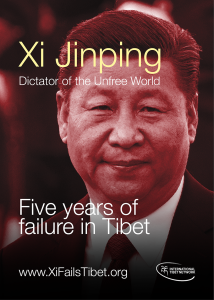 Xi Jinping opened China’s 19th Communist Party Congress today with a lengthy speech that included a strong reiteration of his intolerance of “separatism”. Media outlets reported he became visibly animated as he made the comments – mainly directed at Taiwan but relevant for Hong Kong, Tibet, East Turkestan and Southern Mongolia: “We will not tolerate anyone, using any means, at any time to separate one inch of land from China,” he said. “Blood is thicker than water.” [1]

Reiterating his vision of “the China Dream”, Xi’s three and a half hour speech also featured re-establishing Party control ahead of the CCP’s centenary in 2021; “Government, military, society and schools, north, south, east and west — the party is the leader of all”, [2] continuing his anti-corruption drive; rejecting western-style democracy and stepping up efforts to tackle subversion, terrorism and religious extremism. Among many other issues he also said it was time for China to take centre stage, championed cooperation between nations, and placed an emphasis on environmental protection.

“Xi’s speech confirmed everything we already knew about China’s determination to crush dissent,” said Tenzin Jigdal, International Coordinator of International Tibet Network. [3] “Whilst we welcome Xi’s commitment to addressing climate change, we see a powerful disconnect between his portrayal of China as a responsible global power and China’s behaviour in the international arena – interfering at the United Nations Human Rights Council, punishing governments who speak out about Tibet and human rights, and even imposing the Chinese Communist Party’s intolerance of freedom of expression in our universities.” [4]

Since his ascent to the top of the CCP in November 2012 Xi’s leadership has been characterised by a wholesale effort to silence opposition across a range of issues, not least relating to China’s continued occupation of restive Tibet. International Tibet Network’s new report, ‘Xi Jinping: Five Years of Failure in Tibet’ describes the severity of the situation in Tibet, showing firmly how Xi is, first and foremost, responsible for the intense crackdown that has deepened over the past five years, with China inflicting widespread, systematic repression across Tibet, that is affecting Tibetans’ everyday lives.

“Five years of Xi’s leadership have been five desperate years in Tibet”, said Nyima Lhamo of International Tibet Network. “The situation in Tibet, China, and other territories occupied by the People’s Republic of China, has gone from bad to worse since 2012  – with the deaths of prominent human rights defenders, Nobel Peace Laureate Liu Xiaobo, and Tibetan buddhist leader Tenzin Delek Rinpoche, starkly epitomising Xi Jinping’s rule.”

Tibet, for the second year in a row, is ranked by Freedom House as the second worst place in the world for human rights abuses and freedoms; ranking worse than North Korea and falling closely behind Syria. Freedom House documented wide-ranging violations against basic rights, including an alarming rate of detentions, prosecutions, and convictions of Tibetans for the peaceful exercise of their freedoms of expression, assembly, and religious belief.

“Xi must be held responsible for the current situation in Tibet and, as we move into his second five year term  – or possibly more – the brutal impact of his policies must be brought to the attention of the world”, said Dorjee Tseten, Executive Director of Students for a Free Tibet and Co-Chair of International Tibet Network. “Xi Jinping is the great silencer – silencing dissenting voices and criticism at home and abroad; the dictator of the unfree world. It is frightening to think what will happen in the next five years if governments do not take a stand and call Xi Jinping out on his ruthlessness. We cannot wait until the situation gets worse as it is already critical and world leaders must act now.”

Ahead of today’s opening of the 19th Party Congress Xi has ejected foreigners from Tibet and conducted huge, intimidating military exercises. [5] Restrictions have been implemented to stop Tibetans in Tibet travelling internally and a significant increase on surveillance of digital communications has been reported. [6]

“Xi Jinping: Five Years of Failure in Tibet” highlights China’s policy failures, that have left Tibetans resolutely opposed to China’s rule, with their sense of the Tibetan nation, their spirit, and their diverse resistance undiminished since the People’s Liberation Army invaded their country nearly 70 years ago.

Read and download the full report, Xi Jinping: Five Years of Failure in Tibet from www.XiFailsTibet.org or http://bit.ly/XiFailsTibet

NOTES TO THE EDITOR: