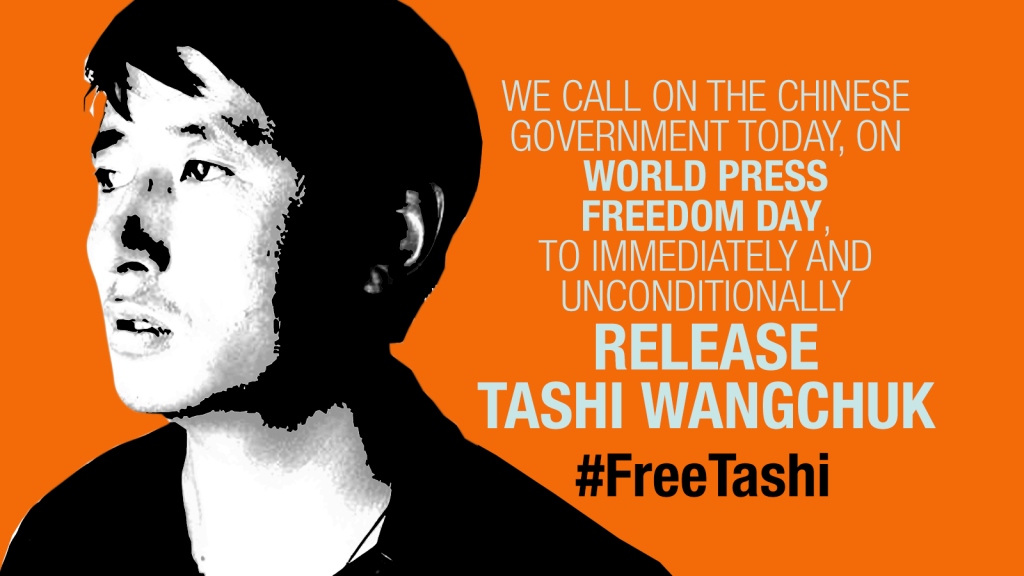 Our organisations are committed to freedom of expression, freedom of the press and human rights in Tibet and China. We are writing today, on World Press Freedom Day, to express our deep concern over the continued arbitrary detention of Tashi Wangchuk, a Tibetan language advocate arrested in 2016 after giving an interview to the New York Times. Tashi Wangchuk has since been tried for “inciting separatism,” a politically motivated charge that violates his rights to freedom of expression and association. We call on the Chinese government to release him immediately and unconditionally.

Tashi Wangchuk began raising public concern for the lack of rightful Tibetan-language education after local authorities in his native Kyegundo (Chinese: Yushu) County forced the closure of local Tibetan language classes and he was unable to find another school to teach his two teenage nieces.

In his article, Tashi Wangchuk insisted that his language advocacy was peaceful and non-political. His attempts to persuade the Chinese government to guarantee Tibetan language instruction were conducted through official channels and he made it clear that he was not advocating Tibetan independence. Instead, his main focus was ending the destruction of Tibetan language and culture.

Despite taking these precautions, Tashi Wangchuk was arrested on 27 January 2016, held in an unknown location and later charged with inciting separatism. He has remained in detention ever since. On 4 January 2018, after nearly two years, he finally stood trial in a closed session, to which  journalists and visiting diplomats were denied access. There has been no indication since January as to the verdict or sentence. If found guilty, Tashi Wangchuk risks a sentence of up to 15 years in prison.

The crime of “inciting separatism” is set out in China’s broad and vague state security laws, which are routinely used to crack down on the exercise of freedom of expression, including attempts by Tibetans (and others) to exercise their cultural and religious rights protected under international law or to send information about human rights abuses to the outside world. The prosecution of Tashi Wangchuk appears to be linked to his interview with the international media about his advocacy for Tibetan language rights: indeed, the New York Times’ video documentary was presented as evidence at his trial.

In November 2017 a group of international experts appointed by the UN deemed his detention a violation of China’s human rights obligations. According to the experts, his advocacy, including the interview with the New York Times, “falls clearly within the right… to seek, receive and impart information and ideas through any media”. They called on the government to immediately release Tashi Wangchuk, and investigate individuals involved in the violation of his rights, noting that “mere assertions by the [Chinese] government that lawful procedures have been followed are not sufficient…” Following his trial, the international experts, including Special Rapporteurs on freedom of opinion and expression, racism, arbitrary detention, and human rights defenders, issued a statement condemning Tashi Wangchuk’s ongoing detention.

The prosecution of Tashi Wangchuk also violates Chinese law, including the Constitution, where Article 4, which provides that “[e]thnic minorities’ right to learn, use and develop their own spoken and written languages is guaranteed in accordance with the law” and Article 35, which states that “[c]itizens of the People’s Republic of China enjoy freedom of speech, of the press, of assembly, of association.”

The Chinese government must comply with its international obligations to respect the rights of the Tibetan people, including their rights to freedom of expression and association, as well as their religious, cultural and linguistic rights. We call on the Chinese government today, on World Press Freedom day, to immediately and unconditionally release Tashi Wangchuk.